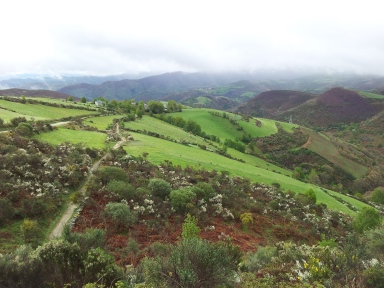 Looking back towards Las Herrerias.

Views when the mist cleared.

After a very nice breakfast we headed up the mountain towards O’Cebriero at 1347 mts. It was tougher going than our first day from St. Jean to Roncevalles but we had definitely got fitter along the way. The day was cool and misty and we stopped at a little hamlet, La Laguna, at 08.00 for second breakfast. We met a young Korean having a glass of vino tinto with his breakfast. He told us his Irish name was Kevin and we met him several times again on the way to Santiago.

We reached O’Cebriero in the early afternoon and stopped for a look around, bought some post cards and little gifts for our grandkids. After a snack we headed down the mountain towards Tricastle. 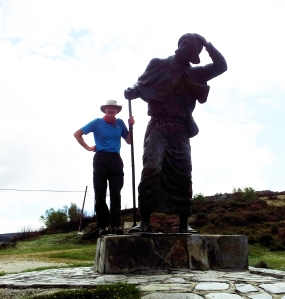 Going down the mountain was not really going just down but up and down pretty much all day. This area has a lot of small dairy farms so the roads and tracks were covered in cow dung.

We reached Fonfria mid afternoon and decided to stay. Fonfria has only a few houses and the albergue, which is also the café/pub/restaurant. It is run by a Brazilian family and is clean and spacious. It was the only albergue where we had to pay for wifi along the whole Camino. Iggys small toes are very painful today with all the downhill walking.

The pilgrim meal this evening was really very good, they kept bringing us extra portions until we were so full we could just about move. I had a game of “close the widow, open the window” with a Dutch guy on the top bunk all night. I would wake up and find the window against my bunk open and the light rain and cold coming in on me, I would close it, after a while the cold would wake me again and I would find the window open again. The window I might add was slightly below his bunk so he might have got the fresh air but not the rain. This went on all night and I was well peeved by morning but in the interests of peace and tranquillity I said nothing.

We plan a short day tomorrow to give Iggys toes a chance to recover.

This entry was posted in Camino 2012. Bookmark the permalink.