We awoke at 06.30 and decided to head off. As we left Sarria we met loads of Irish pilgrims heading out of town. Some didn’t know about the yellow arrows.

We met three girls from Limerick, Kerry and Cork who had taken a week off work to walk the Camino as they had heard about it from someone at work.

As veterans now we gave them some tips on how best to carry their rucksacks and use their walking poles. We also met two brothers from Belfast and walked with them for a while. 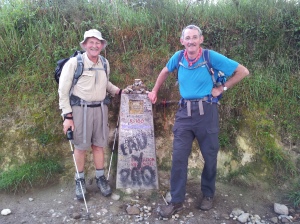 We passed the 100km marker today, this is the minimum amount one has to walk to get their Compostela in the pilgrim office in Santiago.

We had the best breakfast about eight kms or so outside Sarria this morning, bacon, eggs, fresh bread, orange juice and an extra large café con leche and all for about €4.50. We met the three Irish girls here again and when they saw what we were having they ordered the same.

We met Ana again today after several days absence, when we asked her where she disappeared to the last day, she told us she felt so guilty about swearing about the church that morning so she popped into one to say a prayer and apologise to God. As usual she is in high spirits. She walked with us into Portomarin.

The trail was busy today with new pilgrims but there was a difference in many of these, they were all plugged in to their iPhones/MP3 Players, head down, no Buen Camino, just walking on at a fast pace. Some only walked a few Kms then got picked up by bus.

When we arrived in Portomarin all the albergues were full so we booked a double room in a small hotel/restaurant in the town Plaza. Ana booked in here as well.

The rooms were very nice but the staff and food less so. As we were having a beer after checking in we saw some pilgrims being picked up by golf cart in the Plaza and being whisked off to their hotels, each to their own I suppose.

Our pilgrim meal was a bit of a disaster, the food was lousy and poor Ana got an email after checking in telling her she had been sacked from her job as a carer back in England. She was very upset and we did our best to cheer her up. We were also joined at the meal by a French Canadian called Danielle, he had walked with Ana for a few days. A nice guy, with a droll sense of humour.

This entry was posted in Camino 2012. Bookmark the permalink.